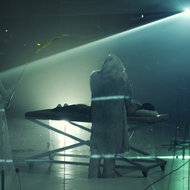 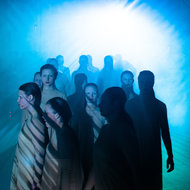 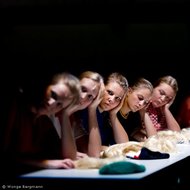 Carmina Slovenica is world renowned for its unconventional, progressive and innovative artistic concept. It was awarded by more than 100 highest awards and recognitions at home and abroad. CS performs with an artistry that inspires audiences and critics alike and stands as a role model in the international choir and music theatre movement. CS has been invited to art events of the highest esteem, such as Prototype Festival NewYork, Festival d’Automne á Paris, Moscow Easter Festival, Dresdner Musikfestspiele, Ruhrtriennale, Holland Festival, Kunstenfestivaldesarts Brussels, Lublin Theatre Confrontation Festival, Melbourne Festival, International Festival Beijing, etc.

Carmina Slovenica's unique choregie concept with adventurous juxtaposition of music and other theatre elements with fascinating sounds of extended vocal techniques set trends in vocal theatre world. With her boldness, provocativeness and erudition that bears no comparison Karmina Šilec transformed this vocal ensemble into a superior artistic formation of the highest rank. The performances of the ensemble are well-known for the precise vocal discipline, exuberant physicality, energy, musical and scenic imagination, authenticity and artistic persuasiveness.

Carmina Slovenica completely revaluated the existing concepts of vocal music and opened up new spaces of expression. It creates a highly theatrical and visceral experience through vocal music that is both unexpected and provocative. What is particularly fascinating is the sound itself being delivered by the performers with changes of various vocal techniques from throat singing to cultivated belcanto. The result is a unique musical experience.

Quotes from press: unmistakably filling the air with hypnotic magic/an exquisite form of unmatched visual and musical poetry/a production full of life and artistic skill/a display of absolute focus and vigor/much more than a top aesthetic musical event – it is an interpretation of life/like being in a magic singing ball/a spectacle of musical and visual perfection/Hosana to one and only God - to God of the purest art