As one of the highly distinguished musical experts wrote, "Carmina Slovenica’s place is on world’s stages between Berlin and San Francisco". Carmina Slovenica holded a central position on the international vocal music scene and has indeed performed on concert stages worldwide. Concert tours in almost all countries of Europe, the USA, Canada, Africa, Australia, Central and South America, Japan, China and others, many top awards at international choral competitions, participation in various international projects, recordings made for many radio and television stations, excellent reviews of the ensemble's performances by musical experts and critics ... all these achievements speak for themselves and confirm the ensemble‘s remarkable reputation.

In selecting the repertoire, CS's groundbreaking exploration of voices as an instrument, as eloquent language in and of itself, expanded the boundaries of vocal concert performances, creating landscapes of sound.

What was particularly fascinating was the sound itself being delivered by the singers in a creative process in which changes of registers, various vocal techniques of throat singing, natural timbre and cultivated belcanto articulation seem so natural and simple as if it were a spontaneous game, an everyday form of communication. The result was some sort of a superb ‘new age’, an absolute musical experience which crosses the borders of cultures, nations, beliefs and merges with the universal human soul into a harmonious organism.

Karmina Šilec crossed the borders of spiritual and cultural limitations, of exclusiveness and prejudice built across centuries, and brought the (musical) world back into the sphere of unity, togetherness, of what is warmly ours. Staged performances of her ensembles can best be described as virtuosic: with impeccable intonation, clear sound, brilliant movement, free of obstacles, almost auto-hypnotic – defined by a flow of energy of an utterly disciplined and ambitious ensemble.

The main aim of the ensemble was a continual search for new music and new fields of work; from early and ethnic music to contemporary music, from new music theatre productions to vocal instrumental works. With its characteristic sound and widely ranged virtuosity it was the ideal ensemble for different repertoires. The performances of the Carmina Slovenica’s incredible musical narrative were distinguished for precise vocal discipline, youthful energy, musical and scenic imagination, and artistic persuasiveness.

Carmina Slovenica performed with an artistry that inspired audience and critics alike and it stands as a model in the international choir movement.

From its establishment on the holistic methodology of working have shaped the ensemble and its singers in an open, creative and utmost conscious auditory feeling to performing sonority of all kinds.

Carmina Slovenica took part in performances in Slovene National Theatre Maribor and in several vocal-instrumental works and has collaborated with several prominent conductors, such as: H. Haenchen, K. Penderecki, S. Hubad, M. Horvat, M. Letonja, U. Lajovic, E. Pohjola, B. Geary and many others.

Karmina Šilec took over the leadership of Carmina Slovenica in December 1989, after Branko Rajšter. Carmina Slovenica has recorded for several radio and television houses at home and abroad and released 21 CDs, 4 LPs and 3 cassettes, 2 DVD's. It has more than 120 international tours over the world and made its appearance at the most prominent festivals and concert stages.

For Carmina Slovenica (lat. Slovene Songs) 54 years of enthusiastic ovations have ended in its last season in 2018. 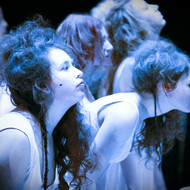 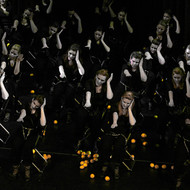 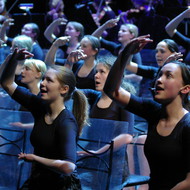 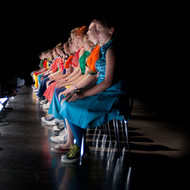