WHEN THE MOUNTAIN CHANGED ITS CLOTHING has been recognized a Golden Mask Winner in the nomination »The Best Foreign Production Presented in Russia in 2015.« 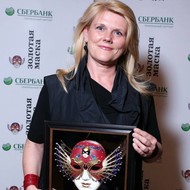 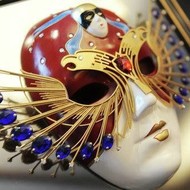 Music theatre production WHEN THE MOUNTAIN CHANGED ITS CLOTHING has been recognized a Golden Mask Winner in the nomination "The Best Foreign Production Presented in Russia in 2015." Awarded performance performed by Carmina Slovenica, which draws its inspiration from the Slovenian folk song Da Pa Ćanynu, is a result of Karmina Šilec's cooperation with Heiner Goebbels - theatre director, composer and one of the greatest creative personalities of today. Project was produced by Ruhrtriennale in 2012 and since than it has toured to several eminent festivals worldwide.

Festival Golden Mask is home to all genres of performing arts: opera, drama, music theater, operetta, musicals, modern dance and puppet theater and it regularly hosts performances from most important Russian theatres, including the Bolshoi Theatre, Mariinsky Theatre, Aleksandrinsky Theatre and many others. In March 2015 Carmina Slovenica participated in the festival as part of a new CONTEXT program in which the organizers of the festival presents high-quality foreign productions that give an insight into the diversity and the reality of theater. 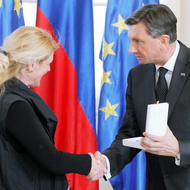 President of the Republic of Slovenia Borut Pahor decorated Carmina Slovenica with the Silver Order of Service or its "extraordinary contribution to the Slovenian and international music culture". 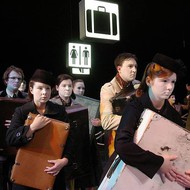 Contemporary music theatre, as it was understood in this competition, includes performances which demonstrate a new development in the art form, be it in score, libretto and/or staging. The competition was open to professional productions which expand the frontiers of the music theatre genre.

With "From Time Immemorial ..." Karmina Šilec introduced once again the concept or method of vocal theatre, called Choregie. With the idea of "Choregie – vocal theatre or theatre of voices" she opened up a wider space for complex multi-form artistic events. Choregie brought freshness and uniqueness by opening new spaces of expression, persuasiveness, intensity of experience and communication into the world of vocal music. Choregie staged productions incorporate music, drama, movement and other stage elements.

For achievements in choral music, important role and a strong influence on the development of world choral movement 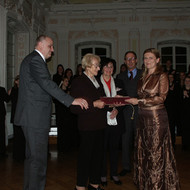 The prize, named after the German composer Robert Edler, has been awarded every year since 1999 to a conductor, a composer, a choir or an institution which visibly contributed to the international choral movement. The award is donated by Tonos Musikverlag and the widow of the composer, Hedwig Edler.

"Artistic and pedagogic achievements of Karmina Šilec reach the highest level of creative work with the young, and she is considered to have an important role and a strong influence on the development of world choral movement."

The prize winners have been the most prominent names of the world music scene:

Tõnu Kaljuste, Estonia (1999) – conductor of the Estonian Philharmonic Chamber Choir, the Tallinn Chamber Orchestra, and a guest conductor of various orchestras and a recurrent nominee for the grammy award; Frieder Bernius, Germany (2001), conductor of the Stuttgart Chamber Choir, the Tafelmusik Baroque Orchestra and Chamber Choir which regularly record for Sony; the World Youth Choir (2002), an international youth choir of the IFCM (International Federation for Choral Music, Jenunesse musicale and Europa Cantat), Unesco Artist for Peace; Maria Guinand, Venezuela (2000), vice-president of the IFCM, and conductor; and Stephen Leek, Australia (2003), composer.

The conductor Karmina Šilec was awarded for the project Vampirabile, premiered with the choir Carmina Slovenica in April 2000 in the Gallus Hall, Cankarjev dom, Ljubljana.

"Karmina Šilec has been contributing greatly to our cultural arena for years with her fresh and innovative approach to choral movement. Her influence on the development of Slovene youth choral singing and the growth of Slovene choral creativity is outstanding. She achieved one of her most convincing interpretative heights with the project Vampirabile, performed with the Carmina Slovenica choir.

Vampirabile gives a superb choral message in all segments, comprised of works of various contemporary composers, ingeniously linked into a dramaturgical whole. Precise singing discipline, youthful energy, imaginative and artistically convincing music and set design are the elements that distinguish the performance which creepily and intensively spreads out into the silence and the scream of musical narration. A rich and secret world of myths, legends, spells and pleas lures us with its intertwinement of imagination and reality of nature and man, belief and experience, hope and anxiety, powerfulness and helplessness …"

for achievements in the field of music 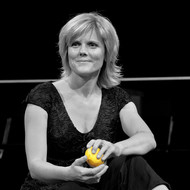 "… Karmina Šilec has not limited herself to the development of choral interpretation. With innovative interventions she opened for choral music a wider space in terms of complex multi-media artistic events. Thus she has – based on extensive research – created a series of comprehensive programmes in terms of style and themes, such as Vampirabile, Scivias, Musica Inaudita and Adiemus. These were interesting due to the choice of musical material, however, their real dimension is reflected in complex executions which logically complement their musical tissue with the elements of musical theatre.

Through her work Karmina Šilec brought freshness and uniqueness into the world choral movement and opened up new spaces of expression, persuasiveness, intensity of experience and communication.

The highest award of the Republic of Slovenia for outstanding artistic achievements in the field of music highlights her important contribution to the development of amateur cultural activities, particularly in the field of music and choral movement with which she significantly contributed to the image of Slovene national culture."

The Carmina Slovenica Choir is the winner of this year's Ford Motor Company Conservation and Environmental Grants programme. The project Slovenian Sounds, followed by the release of a CD Citira – Slovenian Choral Opus II, was praised for its model or rather its approach to music.

Its basic element is full comprehension of Slovenian music and, in a broader sense, Slovenian spiritual heritage; the choir applies this awareness to modern creative forms of expression.

With interpreting synthesis of folk songs, dance and music, the choir manages to avoid the usual trap of pursuing nostalgia, or transforming into a 'living museum'. Folk heritage for Carmina Slovenica forms a model for today's creativity and creations, which comprise characteristics, features, particularities and differences – ingredients that are essential for creating modern life enriched with the dimensions of heritage … in Maribor, in Slovenia and the world! 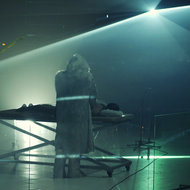 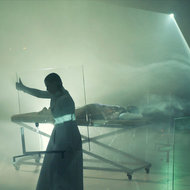 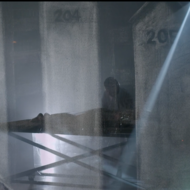 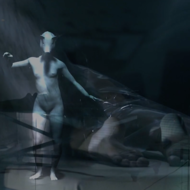 Threnosbrings to the stage that which is so often hidden behind the scenes in a performance that offers space for reckoning and reflection. Slaughterhouses are a place where man, machine and animal meet. Through this connection Threnosis questioning the contemporary social paradigm in which man, by excessive praising of his own culture, almost completely destroys nature.

This is Karmina Šilec's second MTN award, the first being the performance From time immemorial…in the category Music Beyond Opera , produced by the Slovene National Theater Maribor (2008).This year's Music Theatre NOW award is an addition to the set of recognitions to Karmina Šilec for her work in the field of new music theatre; among them the Russian Golden Mask, the nomination for the Europe Theater Prize Theatrical Realities (EPTR), the Prešeren Fund Award, and others.

… THRENOS (for the Throat) is an exciting piece not only because of the ritual in which it engages the audience, but also because it has a strong message. The notion of understanding nature and reflection of society through the metaphor of mourning animals, stands as an experience in which connection is assured. Also the musical composition stands out as a invocation for communities, and for beauty that is given an inspirational interspace for internal reflection by the strong formality of the staging.