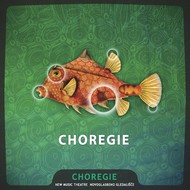 Choregie represents two fields: the artistic principle of creation of music-scenic projects, and a specific method of working with ensembles, developed by Karmina Šilec, used when she prepares ensembles for choregie projects.

The word choregie has got roots in the Greek language where choregies are supposed to be patrons of art, and the idea about developing the choregie concept draws largely from Greek tragedy and particularly the role of the choir in it. The term 'new music', however, refers to the music which represents the very base and a major part of all the projects – the music of our times, as well as to the music which is not commonly heard on stages and is thus considered new, such as medieval music, ethnic music or music taken from certain contexts, e.g. sociological or historical.

With 'Choregie – Vocal Theatre or Theatre of Voices' we started to open up new spaces to multi-form music events at the end of the previous century, and to open up wider spaces to expression, intensity of experience, communication. It was not about breaking down any boundaries between disciplines, it was about putting them next to each other, about coexistence.

The basic disposition of choregie: music which refers to other fields or music which reacts to other fields. In music the score is in direct control of the musician; the reception of the execution of a music piece thus depends only on his or her incentives. This does not apply for the music in choregie; this music requires from a musician and the audience a completely different experience. Namely, the intensive radiation of the heard (music, word) is complemented with the culture of the seen, the culture of the eye, a feeling for the external form. Music thus becomes interesting in a different way as it gets references in a non-musical world. Music, language, vocalisation, the visual and motion coexist, complement each other or stand next to each other in a certain equality. But choregie projects can be performed with different performers, in a different social ambience to the ones usually categorised in other music-theatre forms (opera, operetta or musical).

Choregie are events that reflect the new in the sense of art form, either in music, libretto or set, and leave space for experimenting or exploration of a different music and theatre language.

Nowadays, choregie is being used increasingly in different parts of the world in study processes of various ensembles. The choregie technique refers to an awakening of a creative state. The technique consists of many components which one has to get to know individually and develop on all levels of work, from rehearsals to the premiere.
Choregie emphases are: understand, feel, experience, be aware of, come in contact with, touch on, cooperate, give meaning to something.
The main elements of the choregie technique are: motion, voice laboratory, sculpting, rituals, imagining.

Motion is actively incorporated into all segments of work and is not present only in the final product as movement on stage or choreography. Movement is at work in improvisations (vocal, motive, rhythmic, dramatic), it is involved in vocal technique, diction, intonation and rhythm, in mental training, teambuilding, relaxation and physical training.

The process of working with voice could be called the Voice laboratory or better, Voice exploratorium. Voice is the basic central element of exploration. We explore new sounds, new vocal techniques, new forms of vocal expression whereby voice is understood as an instrument, as a convincing, eloquent, brilliant and tangible language in itself.  It is an exploration of dimensions of how voice can be used in the broadest possible sense.

Sculpting is a laboratory of mind, emotions and expression in general. This field of research of the inside of performers is an exciting territory focused mostly on the removing of certain reluctances or barriers of the performers, mental as well as physical.

When performing on stage we like the performers to appear as natural as possible, with an honest presence which we come close to when we are in a ritual. We still carry ritual roots deep inside, even though it seems that there is not much left today of the ritual. Therefore, in the search of this primal feeling when singing and creating in general, we focus on dimensions of the ritual.

Imagination is actually crucial for whatever we do in life. It is in a sense a vision of what is to happen in the future. With the technique of imagining we achieve insights into the inner world of the performers where inner forces of concentration and imagination spring to life. These insights help the performers to grow, to open up to various new dimensions and at the same time mature in the understanding that their role is the transfer of various imagining to the audience. Imagining, regardless of its form, is closely linked to the terms such as concentration, motivation, collective connectedness, elimination of obstacles, encouraging of creativity, etc.