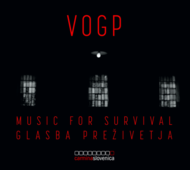 The beauty of voices is echoing in the times of violence in the middle of an unexpected tropical-forest drama. A village in Sumatra during WW2. The internees are struggling with torture, hard work, sickness and deaths – typhoid fever, dysentery, malaria, lice, fleas, scabies, hunger and unbearable heat kill over one third of them. In the barrack no. 9 a vocal orchestra is established. Now there are three things to help them survive – the love of God, sunrises and sunsets, and the transcendent singing of the vocal orchestra.

VOGP as an idea of hope and beauty echoing from the music of the female vocal orchestra, as a testimony of women’s capacity to survive, of their persistence, solidarity and creativity, and as an extraordinary legacy of determination and strength in unimaginably atrocious conditions. VOGP is the emblem of the complex relationship between music and trauma – when music becomes a universal symbol in suffering and the ultimate sanctuary in despair.

... mature, well-trained voices created a sound and artistic energy that is rarely heard and unforgettable ... outstanding musical expression ... doubtlessly, in these states of the soul the feelings and the mind of the artists or performers project a spear of redemption in an artistic expression that is most free and most liberating ... a magnificent experience, touching and bitter at the same time ... Večer

... privilege to experience the sounds of the Slovenian women’s choir Carmina Slovenica ...
... a touching concert by the Vocal Orchestra Carmina Slovenica under the inspirational conducting of Karmina Šilec ... the sound quality of the choir impressed to such an extent that one at times could imagine hearing the original instrumentation …

… Šilec showed an insight into not only the vocal genre, but also the original works in her choice of tempi and a variety of vocal colours employed to interpret each work individually. Each voice group had its own character and contributed to the vocal tapestry with a great measure of responsibility and integrity. With a very well executed vocal legato and flawless and admirable intonation the choir took listeners on an emotional, but also rich artistic tour through beloved melodies ... Tageszeitung

... different, unconventional music-making with the deepest emotion ... under the sublime conducting of Karmina Šilec ... perfected musicianship ... you are touched not only by glorious voice,s but also the attitude ... Everything ran glamorously, mind-blowingly: rich sound, clear intonation … heartbreaking grace and beauty of alto voices ... POLE

Antonin Dvořák: Largo (from symphony From the New World)