Sheep, what are we waiting for? There's a wolf in the flock!

Fortuna Won’t Be Fauvel’s Match! is based on a gothic allegorical verse romance in which the central metaphor for moral decay and decadence is an ambitious horse/ass. The main character – Fauvel – is an incarnation of sin, irrationality, unreliability, dominance, flattery. Fortuna Won’t Be Fauvel’s Match! mocks human egotism, hedonism, hypocrisy and excesses of the governing classes, of secular as well as church rule, a society contaminated by sin and corruption. The ruling class is despotic and greedy, forgetting about the natural equality of people. Man through politics/the church is a symbol of everything that is wrong with our society and the system which administers it. This issue fascinates since it judges exploitations in the human society and poses the question if today, after 700 years, it is any easier to talk, or do we still whisper.

This choregie project is based on the only music-scenic work by the composer Lojze Lebič – Fauvel '86, being at times expanded by compositions from the original medieval poem Roman de Fauvel, and fragments from medieval ritual plays, literature and philosophical writings.

The composition goes back to the verse romance which revolves around a horse and was composed as a counterpoint to heroic poems written at the French court and preserved in various manuscripts under the title Roman (book) de Fauvel. It is one of the earliest music-scenic works whose complexity grants it an important place in the history of music, literature as well as visual art. The romance portrays the main character, an ambitious horse/ass named Fauvel. The name of this anti-hero is double: it means a ‘false veil’ and is at the same time an acrostic of six major vices:

Fauvel gains prominence on the French court due to the "strange spinning of Fortuna's wheel". Fauvel's absurd climb to the position of the king reflects how God's order is turned upside down: evil is allowed to rule while the good is forced to suffer. Fauvel is a personification of the evil and tyranny, a society contaminated with sin and corruption. This story about the masterful fraudster, portrayed according to the medieval allegoric mind, is a distant formal and contextual background of Lebič’s composition Fauvel ’86. Sociality is placed on a subsidiary line: as an objective indicator of human personal unease. The target addressee is not human culture but individual nature, the spiritual side of man. As we are trying to find meaning in today’s cynicism, in our longing for a "better way" it seems that Fauvel resonates with all its intensity and colour, as it did originally, several centuries ago.

… music theatre which … is becoming a category, a phenomenon and a measure on its own …
Večer

… the synaesthetic effect of individual elements of this comprehensive work of art particularly intensive and original ...
Večer

… astonished at the ability of the young corpus, acting with confidence, mastering the challenging choreography, is verbally nimble and musically perfect …
Večer

… dramaturgical arc of the performance is incontestable, and the suggestiveness of scenes underlined by incredible abilities of young women-actors, performers, finest interpreters …
Večer 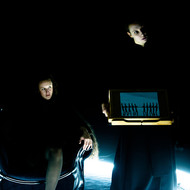 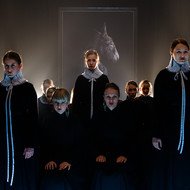 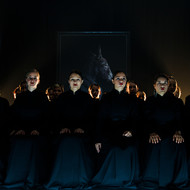 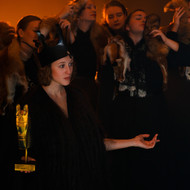 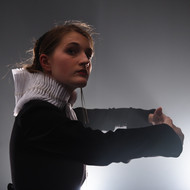 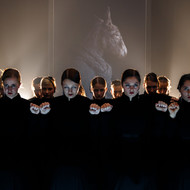 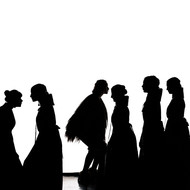 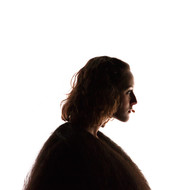 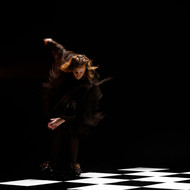 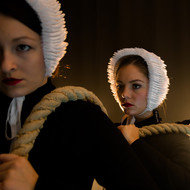 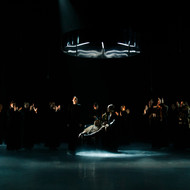 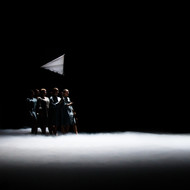