There's no smoke between me and the sky

At the foot of the hill where my house sits, I step from my car and open the trunk. I take off the suit and my German shoes, rip the tie off my neck, the shirt off my breast, the buttons popping, and throw the alien clothes into the trunk. I see the stars of my motherland, they are brighter than those in Germany, there’s no smoke between me and the sky. (H. Müller)

Memories are the main protagonists, and voices from the past are the ones that lead us to unexpected effects where Time takes initiative for action.
Figures – farmer and women - speak from within their historical contexts into the present in an effect which creates a museum-like theatre of the dead.
German history and culture, its effects across the broader field of Europe:
Final days of WW2. A Croatian SS-man, who looks to German officers widows "like a peasant", arrives and does the job for them.
The pain and suffering of modern German history:
Present time. Croatian soldier is now a guest worker in Germany, dressed in a suit, shirt and tie. He tells his story.

...  to analyse a very real happening with all the symbolic and allusive subtones ...
Delo

... man gives himself over to the totality of the performance and its hypnotic atmosphere. Created by the music, of course …
Delo

... another example of Karmina Šilec’s well thought out approach to expressive possibilities of music theatre ...
Delo

... which presents relatively complex subject matters in a way that is suggestive ...
Delo

... Šilec has a remarkable ability to keep these elements (music, singing, movement, set and light) autonomous at the same time …
Delo

... the concept of Karmina Šilec belongs to the series of her visions of music theatre escaping narrow categorisation ...
Delo

... the elements correspond among each other magically ...
Delo 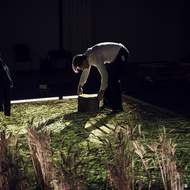 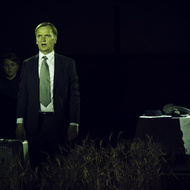 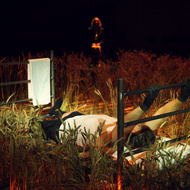 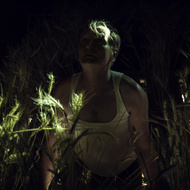 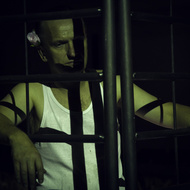 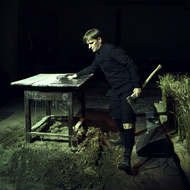 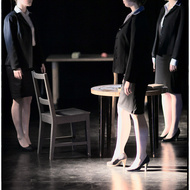 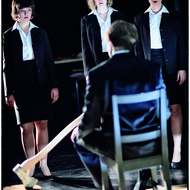 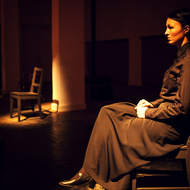 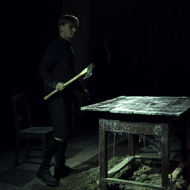