When the mountain changed its clothing

Who will live after them? Their children.

You must not do that.
- Why not?
Because it is wrong.
- Wrong! What is wrong?

When the mountain changed its clothing draws its inspiration from the Resian folk song Da Pa Ćanynu, reflecting on the seasonal changes on the mountain of Kanin, Slovenia. According to Goebbels, intense activity on the stage derives from the exceptional energy of the young protagonists and reflects social transformations related to rapid political, social and cultural changes within the region the performers are coming from.
The old is no more, yet the new remains out of reach. On this threshold, they assemble to play seemingly harmless games, verses, songs, and create poetically threatening images. In a mutual interplay of sovereignty and repression, the singers move through the cycle of seasons, constantly calibrating the balance of power relations among one another and especially between the audience and the stage.

Production was awarded with Golden Mask Award for "Best foreign production, presented in Russia in 2015"  and with "The Children's Choice Awards" / Ruhrtriennale 2012.

... vocal Theatre Carmina Slovenica beams through the soul like a laser ... You have to hear and see it to be able to believe it ...
Parool

... it is really astounding with what agility, body control, precision and speed the girls act – performing, speaking, singing ...
Tanzbau

... chorus, who exhibited both great technical skill in their singing and proved themselves highly disciplined thespians as well ...
Opera Lively

... they can do anything ... with that marvellous energy, composure and professionalism ...
Le Monde

... Carmina Slovenica, who’ve gained a world-wide reputation for their powers of story-telling through choral song ... the girls’ power of memory in a foreign language were impressive … joyous moments of collective energy or anarchy that these astonishing performers shone, and the piece itself really came alive ...
The Telegraph

... the world renowned ‘Vocal Theatre Carmina Slovenica’…  the theatrics and the beauty of music and glamour of vocals …
Theatre review Melbourne

... Carmina Slovenica (under conductor Karmina Šilec) is a phenomenon in itself ...
Financial Times

... deeply rooted, seemingly quite independent energy, that moves us ... with precise choreography and skilful brilliance that abounds in choral manoeuvres ...
Der Standard 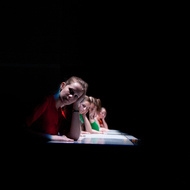 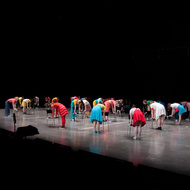 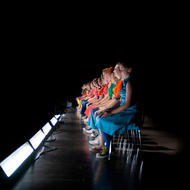 When the mountain change its clothing